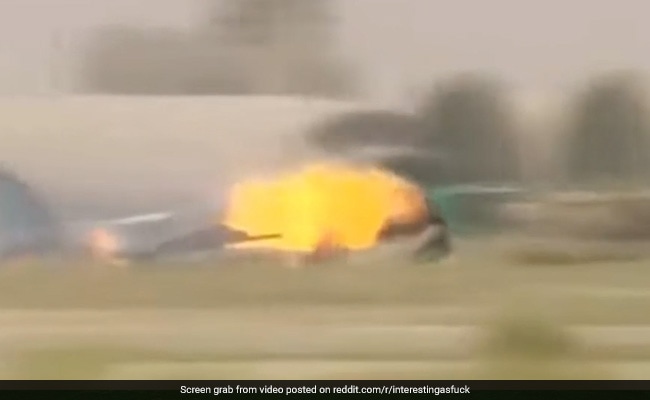 An old video is going viral on social media in which it is seen how the pilot of a British Fighter Jet crashed the plane engulfed in flames. Saved his life a few seconds ago. The incident took place in Afghanistan in May 2009 when a Royal Air Force plane was landing on the Kandahar airstrip. The pilot avoided a major accident but eventually had to exit the plane as the fire had reached the cockpit. This hair-raising video has started a debate among social media users. All the people are asking this question that why did the pilot take so long to leave the plane.

This 34 second clip has been posted on Reddit. It is seen that as soon as the plane touches the ground, its front tip falls. According to BBC reports at the time, it was a Harrier jet and the pilot suffered minor injuries.

According to the Aviation Geek Club, it was part of a team of two planes on mission in Afghanistan. He was also carrying bombs and gunpowder with him. But before landing near the air base in Kandahar, the aircraft received a missile alert warning, the enemy’s surface-to-air system has been detected. Sparks emanated from the plane immediately so that the infrared-guided missiles could be flashed and landed.

However, according to the UK Defense Ministry, there was no indication that the incident was the handiwork of the enemy.

There was very little time for the second aircraft to land at an altitude of 6,500 ft, while this Harrier aircraft was also at a very high altitude, the aircraft’s tail hit the ground in the second attempt to land. Due to this the landing gear broke and the plane dragged to 4,0000 feet.

Previous SCO vs IRE: Fans hugged Curtis Camper, who won the match on his own…Kiss also, see
Next These 20 apps consume the most battery of the mobile, delete them immediately