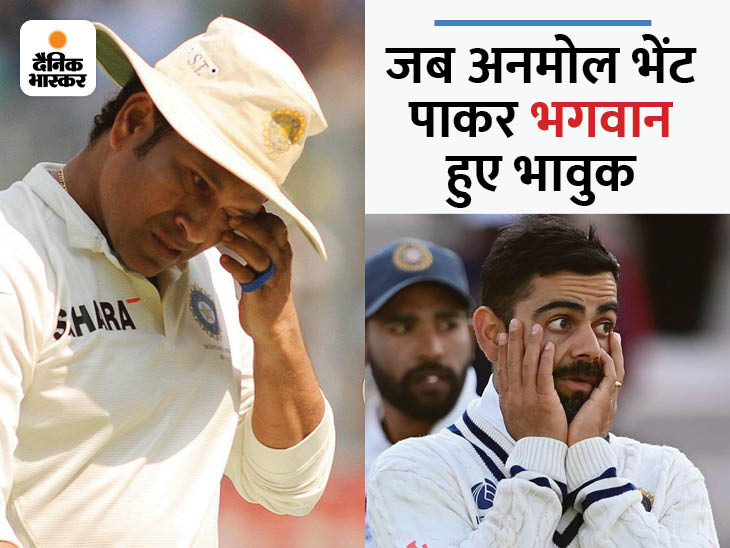 The great batsman of Team India played his last match on 16 November 2013. The whole country was emotional after his retirement. At that time, Virat Kohli had given a special gift to Sachin. Sachin Tendulkar has now said in an interview that he became very emotional after seeing that gift from Kohli and tears came from his eyes.

In 2011 when Team India won the World Cup. Kohli carried Sachin on his shoulder.

In an interview with American journalist Graham Bensinger, Sachin said that after my last Test, I was sitting in a corner in the dressing room and wiping my tears. At that time Virat came to me and gave me a sacred red thread, which was given to him by his father and it was his last sign.

I kept it with me for some time and then returned it back to Virat. I said it is priceless and it should stay with you. No one else has. This is your property and it should remain with you till your last breath. It was a very emotional moment, which will remain in my memory forever.

What did Kohli say?

Kohli had also said in an interview with Graham Bensinger, ‘The dearest thing that I have close to my heart is the thread my father gave me. This is what my father used to wear. So I used to keep it in my bag and I thought it was the most valuable item that my father gave me and I could not give anything more valuable than this to Sachin.

I also told Sachin paaji how much you have inspired me and how much you mean to me. This is my small gift, but Sachin did not take that gift and he became emotional and had tears in his eyes.

Virat took over Sachin’s legacy
Sachin Tendulkar has played 200 Tests and 463 ODIs for Team India. After the retirement of Sachin in 2013, Virat Kohli took the responsibility of filling his place. Many records of Sachin have been broken by Kohli. After Sachin, Virat holds the record for most centuries in ODI cricket. Virat and Sachin were also part of the 2011 World Cup winning team.