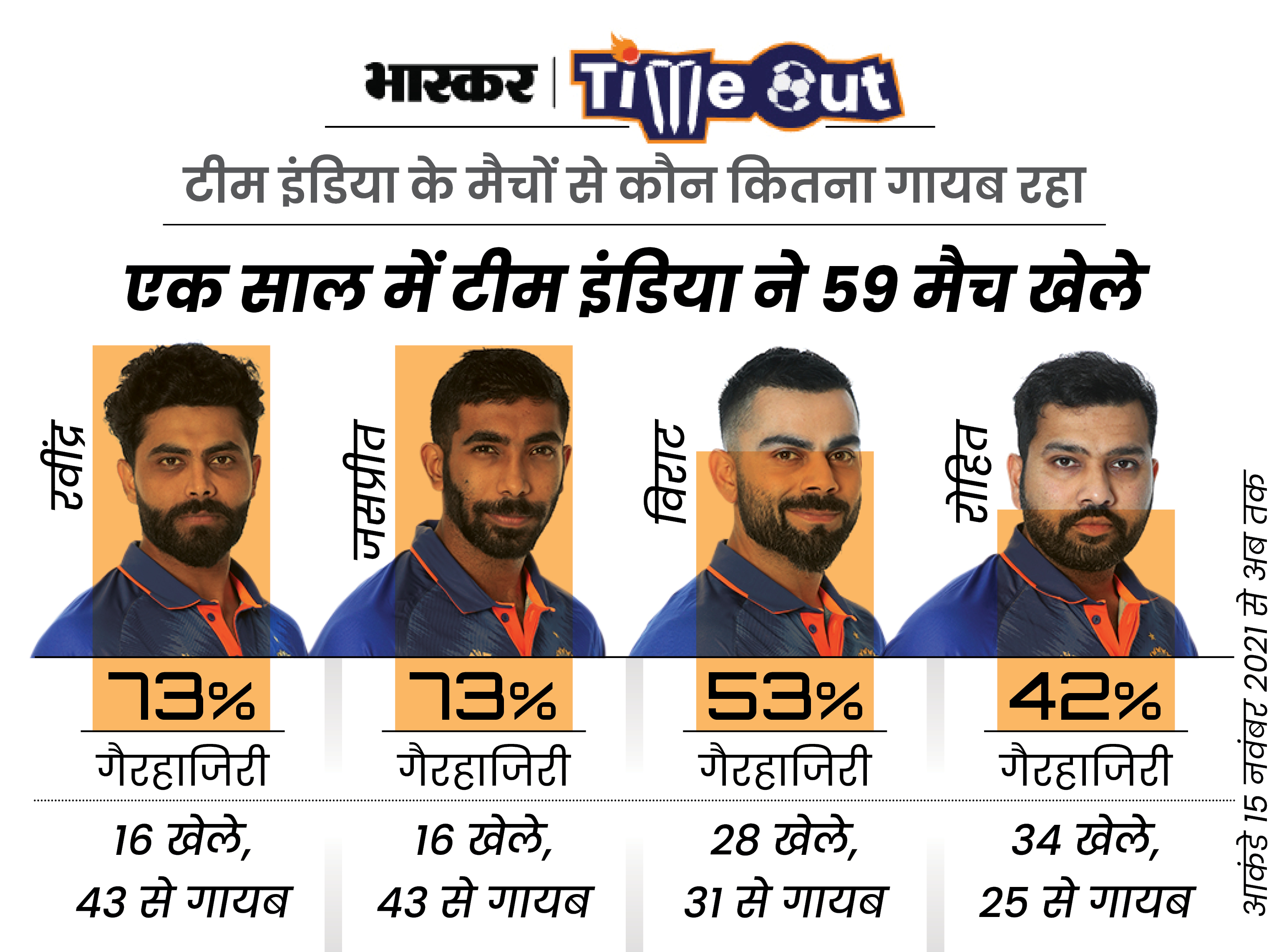 Star, the official broadcaster of the T20 World Cup in India, has run an ad campaign … a lot waiting … Jeet lo cup ab ki baar. The Indian team has been waiting to win this tournament since 15 years. We got success for the first and last time in 2007.

The wait was getting very long, so the Board of Control for Cricket in India did a lot of preparation. Since the last T20 World, 35 matches of this format have been done for this team within 11 months. If we add the remaining two formats, Test and ODI, then a total of 59 matches took place during this period. But, when the team was formed, most of the players got the chance who played the least in these 59 matches.

Some players were given periodic rest throughout the year to keep them fit for the World Cup. But, he got injured while resting. let’s in surmas Let’s talk about it one by one. Before that let us give your opinion in this poll…

Virat Kohli has been missing from 31 international matches in the last one year.

Starting from top 3 i.e. Rohit-Rahul-Virat
Rohit Sharma and KL Rahul will open for India in the World Cup and Virat Kohli will come at number-3. This thing was decided not today but a year ago. Despite this, these stars have been missing from almost half of Team India’s matches in the last one year. Virat was missing in 31 out of 59 international matches. Rahul did not play 37 matches. At the same time, captain Rohit Sharma also missed 25 matches. Talking about T20 only, Virat did not play 21 out of 35 matches of India after the last T20 World Cup. While Rahul was missing from 23 matches, Rohit missed 9 matches.

Team India captain Rohit Sharma has missed 25 matches in the last one year.

Same condition for middle and lower middle order
Suryakumar Yadav will land at number 4. He has played 26 out of 35 matches. Hardik Pandya, who came at number-5, played only 19 matches. Dinesh Karthik can come at number-6. He has also missed 11 matches. Axar Patel got a chance to play only 20 matches in 35.

Some of our players are such that they are getting injured while resting. Jasprit Bumrah has played only 5 T20s and a total of 16 international matches since the last World Cup. Despite this, he is out of the team for 4 to 6 months due to a back injury. Same happened with Ravindra Jadeja. They are playing 9 T20 and 16 International matches in so many days. He is also out of the World Cup team due to injury.

How to play 14-16 matches in two months in IPL when rest is so important
You can say that players should be fit and fresh, so it is necessary to give rest in between. If so, then this philosophy should be applicable in IPL also. But, it does not happen there. In the next picture you can see how many matches our stars miss in almost two months of IPL. Rohit and Bumrah played 14 consecutive matches for Mumbai last season when their team was knocked out of the play-off race after 10 matches. That is, he continued to play in the non-essential matches of IPL. Taking the risk of getting injured. But, when it is his turn to play for the national team, he needs rest.

Would have learned only from Babar-Rizwan of Pakistan
Our stars can also learn from Pakistan’s stars Babar Azam and Mohammad Rizwan, what is the hunger to play for the national team. Pakistan played 36 international matches since the last T20 World Cup. Babar appeared in all 36 matches. Rizwan played 34 matches. As far as T20 is concerned, Pakistan played 20 matches in this time period. Babur was present in all. Rizwan played in 19.

The pair of Babar and Rizwan does not miss any match for Pakistan. Both are in the top 5 batsmen in T20 rankings.

When Bumrah was consistently unfit, why was the option not ready?
The way Jasprit Bumrah has got rest from the rest of the matches except IPL, it seems that his fitness has not been good for a long time. If this was the case, then why did the Indian think tank not prepare any alternative for them in so many days. Bumrah is sitting on his back just before the World Cup and Indian fans are holding their heads about who will bowl in the death overs now.

Indore T20 lost due to batsmen’s leave
India fielded a full-strength team for the three-match T20I series against South Africa. The motive was that these three matches would be used to cement the team combination before the World Cup. After doing two matches, India captured the series, Virat and Rahul again went on leave. Under compulsion, India played the last match on the strength of only five specialist batsmen.

It was only after the fall of five wickets that Axar Patel and Harshal Patel were at the crease. Both are generally worth batting at number 8 or below. But, there were less specialist batsmen in the team so they had to come up. The result was that the Indian team lost the match by 49 runs.

Our B team in front of South Africa’s full strength team
At present, the ODI series is being played between India and South Africa. The question also arises that why is the last ODI series happening just before the T20 World Cup. However, South Africa has fielded its full strength team for this series as well. His team consists mostly of the same players who will play in the T20 World Cup. But, India has fielded a B team. Our core team has left for Australia for better practice. With those players who kept on leaving the opportunity to get practice by playing international matches even after taking a break.

The first ODI of the three-match series was played between India and South Africa in Lucknow on Thursday. In the beginning, due to incessant rain, it seemed that the match would not be possible, but soon the match started. A match of 40-40 overs was played instead of 50. read full news

India lost by 9 runs in a thrilling match: Sanju Samson’s 86-run innings could not even win, South Africa lead 1-0 in the series

Team India lost the first match of the three-match ODI series between India and South Africa by 9 runs. In the last over, the Indian team needed 30 runs to win and Sanju Samson fought till the last ball, but could not get the team to win. read full news