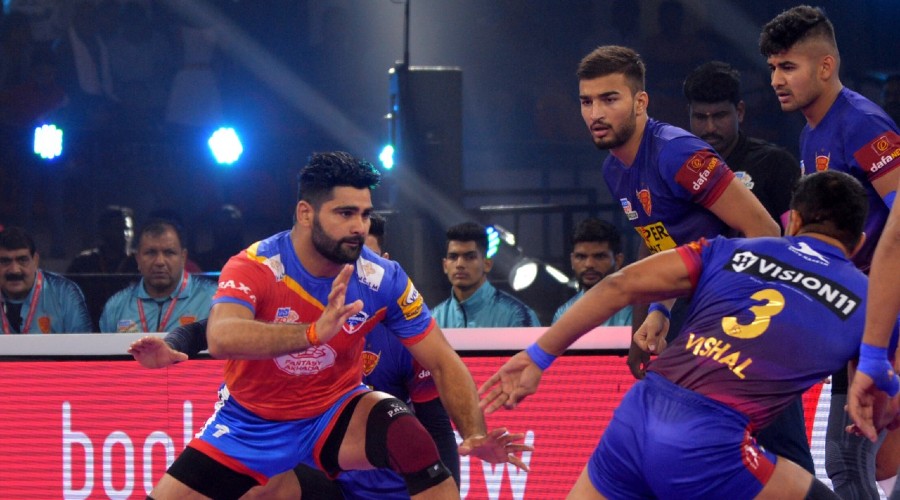 VIVO Pro Kabaddi League 2022: In a thrilling match, Dabang Delhi KC beat UP Yoddhas by 2 points to complete a hat-trick of victory in the ninth season of VIVO Pro Kabaddi League. In the 15th match of the season played on Wednesday at Sri Kanteerwa Indoor Stadium, defending champions Dabang Delhi defeated UP Yoddhas 44-42. Delhi’s team remains the table topper with its third consecutive win.

Delhi won on the strength of Naveen-Manjeet

UP has lost two matches and won one. He is at number-5 in the points table. The heroes of Delhi’s victory were Naveen Kumar (13 points) and Manjeet (12 points), who completed their respective Super-10s. Both of them, thanks to their excellent game, faded Surender Gill’s 21 and gave their team a memorable victory.

UP had already taken an all out 11-5 lead in the first half. UP’s defense was going on and due to this, UP soon made its lead 14-7. Delhi’s defense was not working. However, the new points were seen taking. This was the reason why Naveen saved his team from all-out for the second time and got three points and made the score 17-11.

UP, however, soon took a 21-11 lead by all-out Delhi for the second time. After the all-out, Delhi took two consecutive points and made the score 15-23. Meanwhile, Surender Gill of UP completed his Super-10 but Manjeet took four points on the last raid of the first half and made the score 19-25. Delhi’s defense was making mistakes and this was the reason why UP took a 29-21 lead.

Naveen soon hit a hat-trick of Super-10. Soon Delhi all-out UP for the first time and made the score 26-33. Then Ashu made the score 29-34 with a two-point raid and then Delhi reached 30 figures by stopping Gill from taking a dip.

After this, Naveen Express gave his team the 31st point while taking off. Meanwhile, Pardeep came and quietly left with a score. Then Manjeet took one point and reduced the lead to just three. The defense of Delhi had also started running now. He made the score 33-35 by stopping Pardeep from taking a dip. Delhi soon all-out UP for the second time and took the lead of 37-36 for the first time in the match.

Delhi won the match by 2 points in the last raid

Although UP soon took the lead by only one point, but Vishal Lather dismissed Gill on the best dive to make the score 38-38. Delhi again took the lead of two points but Naveen was caught by UP to make the score 39-40. Then Surender made the score 40-40 with a back kick. Gill then made his team 42-40 by taking points on Do or Die Raid. Super tackle was on for Delhi but before that there was a do or die raid.

Manjeet not only completed his Super-10 with a two-point raid but also equalized the score by reviving Naveen. In defense of four, Gill came on raid but was caught. Manjeet tackled him and put Delhi ahead 43-42. Now Naveen was on the raid. He went blank. Pardeep came on the last raid but he was declared out. Delhi thus won this exciting match by a margin of two points.

Also read- Women T20 Asia Cup 2022: This team, which started with defeat, created history, the teams decided for the semi-finals