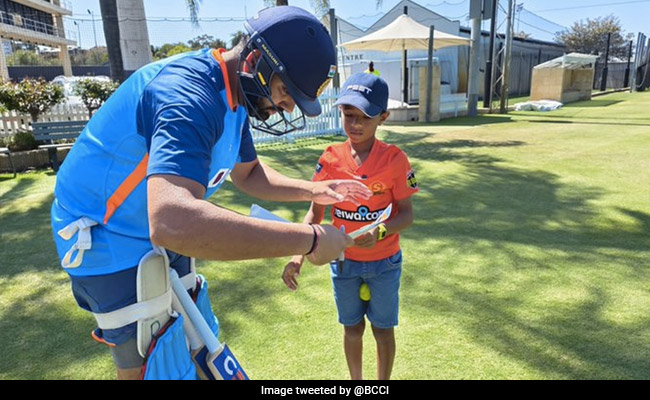 Rohit Sharma Video: Rohit Sharma Surprised to see the bowling of an 11 year old boy. Actually, BCCI has shared a video on Twitter in which Rohit is seen practicing batting on the bowling of 11-year-old bowler Drushhil Chauhan. Not only this, Rohit has also been seen giving autographs to that 11-year-old young bowler. Actually, it happened that India’s captain Rohit had seen Drushil bowling at the WACA ground. The hit man was so impressed with Drushil’s bowling that he was called to bowl in the Indian nets and also practiced batting on his balls. Rohit then gave autographs to the 11-year-old bowler. Fans are also stunned to see this gesture of Rohit.

Let us tell you that Drushil Chauhan bowled against the Indian batsmen and also met India’s supporting staff. In the video, Drushil told that Rohit saw him bowling and he was very impressed with him, then he invited me to bowl in the nets. Drushil further told that Rohit told him that, if you stay in Perth then how will you play for India. On this I told him that he would also come to India.

When a 11-year-old impressed @ImRo45 with his smooth action!

A fascinating story of Drushil Chauhan who caught the eye of #TeamIndia Captain & got invited to the nets and the Indian dressing room. #T20WorldCup

Let us tell you that in the T20 World Cup, the Indian team will play its first match against Pakistan in Melbourne on 23 October. This time Jasprit Bumrah is not in the Indian team due to injury. In his place, Mohammed Shami has been included in the team. Apart from this, Ravindra Jadeja is also out of the team. Axar Patel has been given a place in the team in place of Jadeja.

T20 World Cup begins, know schedule, when and from what time in India you will be able to watch matches, prize money of Rs 46 crore is at stake

Mohd joined the World Cup team in place of Bumrah. Shami, and the Indian team on the tour of Pakistan?

Previous 5 Best 5G Smartphones Under 20000, Special Deal is available on these latest 5G Smartphones, their price is less than ₹ 20000 – great indian festival sale offer on best 5g smartphones under 20000
Next Oppo’s cheapest smartphone with 8GB RAM is blowing up, know the features and price