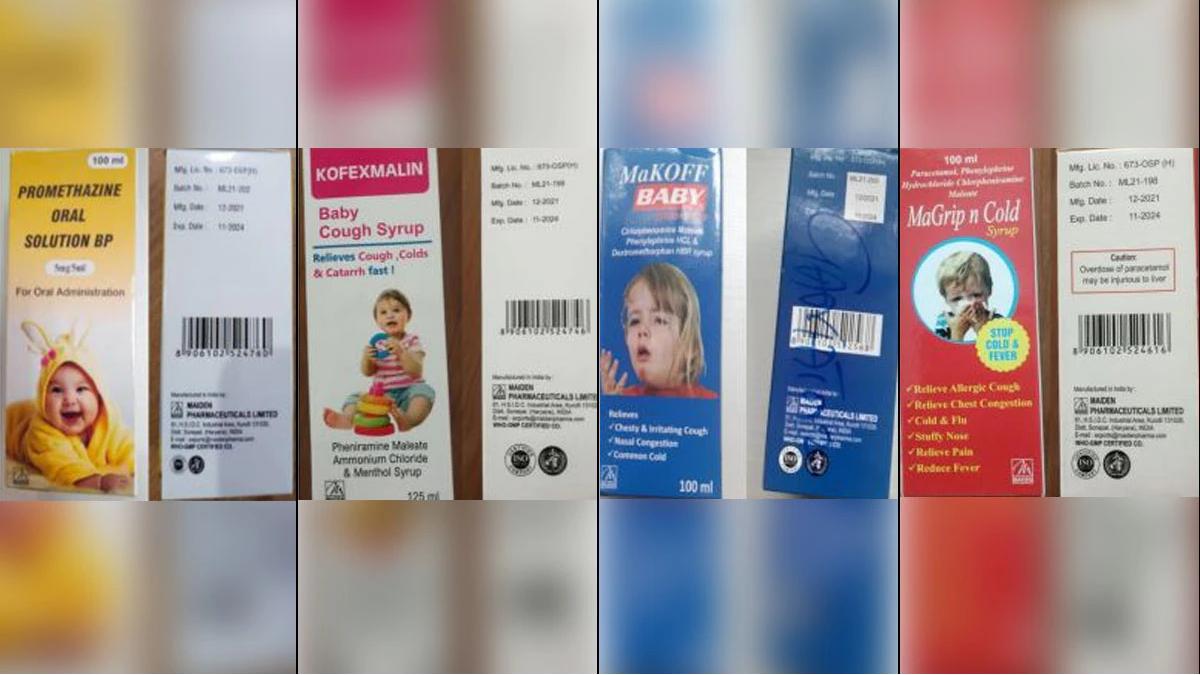 The WHO says that these cold-cough syrups have so far been found in The Gambia, but they are likely to reach other countries through the informal market. WHO has advised to stop these cough syrups immediately.

The four cough syrups that the WHO has declared unsafe have been made by Maiden Pharmaceuticals of India. This company is from Haryana and its corporate office is in Delhi. After the alert of WHO, investigation has started against the company.

1. Which four cough syrups are said to be deadly?

2. But why said dangerous?

The WHO issued a press release stating that the amount of diethylene glycol and ethylene glycol in these four cough syrups has been found to be excessive.

Diethylene glycol and ethylene glycol are toxic to humans and can be fatal. It can cause abdominal pain, vomiting, diarrhea, difficulty urinating, mental status changes, and severe kidney injury, which can even lead to death.

The WHO said that these four cough syrups should be considered unsafe until the regulatory authority of India analyzes it. WHO has asked to stop their sale. At the same time, it has also been said that it is dangerous for children and they can also die.

3. What happened in The Gambia?

Medical authorities in the African country of Gambia issued an alert in July when dozens of children were falling ill with kidney problems there. Some children had also died. So far 66 children have died there.

The same pattern was revealed in these deaths. And that all these children were less than 5 years old and they were getting sick after 3 to 5 days of taking cough syrup.

According to the news agency, Mustafa Bitaye, director of the Health Service of The Gambia, told that the number of deaths has decreased in recent weeks and the products of Maiden Pharmaceutical have been banned. But even now they are being sold in private hospitals and clinics.

4. What is the history of Maiden Pharmaceutical?

According to the information available on the company’s website, Maiden Pharmaceutical was started in 1990. It has three manufacturing plants in Haryana. Whereas, its corporate office is at Netaji Subhash Palace in Pitampura, Delhi.

After the WHO alert, it has been learned that the company has a history of violating rules and standards. The central government says that the company was licensed by the state drug regulator to export and sell these four cough syrups in The Gambia.

Previous reports show that the company has been violating the quality control standard in many states, but despite this, the officials kept flagging it. St Petersburg-based public health activist Dinesh Thakur took to Twitter to question the functioning and pre-qualification process of India’s Central Drugs Standard Control Organization (CDSCO) and WHO.

5. What are the rules for licensing of drugs?

Dinesh Thakur tweeted that CDSCO usually gives money to the State Drug Controller, which gives licenses for manufacturing of drugs. Whereas, Maiden Pharmaceutical was certified by CDSCO through CoPP i.e. Certificate of Pharmaceutical Product process.

The CoPP certificate lets the buyers abroad know that India’s CDSCO has inspected the drug. Apart from this, this certificate also gives confidence that the pharmaceutical company exporting the drug follows the WHO standard.

Thakur claims that the pharma company has to give this certificate to the buyers from abroad. The past track record of the company is good, so doesn’t it raise the question on what basis Maiden Pharmaceuticals was given this certificate.

6. When did questions arise on Maiden Pharmaceutical?

In 2011, the Bihar government had blacklisted Maiden Pharmaceuticals for supplying substandard quality medicines. The government found the company’s Methylergometrine tablet to be fake. Apart from this, Erythromycin syrup also did not live up to the quality.

In 2017, a magistrate court in Kerala imposed a fine of Rs 1,000 on the company. A case was registered against the company by the Drug Inspector in 2005. Jammu and Kashmir had also raised questions on the quality of the company’s products.

According to the database of Extended Licensing, Laboratory and Legal Node (XLN), Kerala and Gujarat governments have repeatedly warned about the company’s illegal activities. This database is maintained by the central government.

7. What does the company have to say?

Several messages and calls were made to the company’s promoter Naresh Goyal regarding the alert issued by WHO regarding four cough syrups, but he did not respond.

It is written on the company’s website that it is a WHO-GMP (Good Manufacturing Practices) certified company, which sells its products in many countries.

The website claims that the WHO-GMP certificate holds credibility in the international market and allows the company to enter into agreements with other countries to export the drug.

8. In which countries does the company sell the medicine?

According to the website of Maiden Pharmaceutical, apart from selling products in India, the company also exports to countries in Asia, Africa and Latin America.

9. What happened to the company in the Gambia case?

After the death of 66 children in The Gambia, the WHO has called four of the company’s cough syrups fatal. At the same time, investigation has started against the company in India as well.

On Thursday, the Health Department team visited the company’s manufacturing plant located in Sonipat, Haryana. A case has been registered against the company under sections of the Drugs and Cosmetics Act.

10. How much damage has been done to the image of India?

Anant Bhan, former president of the International Association of Bioethics, said that this shows that there has been a serious lapse on the part of the pharmaceutical authorities and there is a need for a transparent investigation in this matter.

He said that it is necessary to find out where there were gaps in the production and export of medicines to The Gambia. Until this happens, Indian pharmaceutical products will be viewed with suspicion in the world.