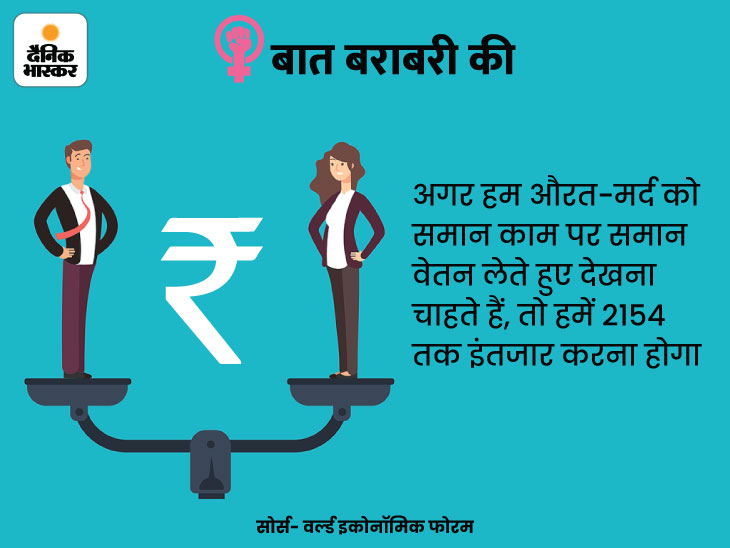 Women may do a job of their own mind, but men will keep an account of their salary; Logic – Women do not know maths. Baat Barabari Ki Gender Pay Gap; Working Women Financial Decision

Pennsylvania Avenue, a posh street in Washington, was specially decorated with buildings in the late 19th century, where only the wealthy could visit. These red-grey brick buildings would have had a single room, from a bathroom to a dressing table. The waiters would come every now and then to serve cold and hot drinks. Women wearing hats on their heads and gloves in their hands would also come and sit here.

She was actually waiting. Waiting for my husband, who would be handling the bank accounts in the next room.

These halls were called ‘Ladies’ Lounge’, which was the only link connecting women and money. Prior to this, his relationship with the bank was as much as with making pickles for men.

Women then were not rich or poor, they were simply women, known by their father’s or husband’s or male child’s status. Even if someone had family money, it would be managed by the man of the house. Women had only enough leeway to buy new fashion clothes, jewelry, and shop for kitchen menus.

Over time, the concept of ladies lounge ended, and women also started having accounts in banks, but only accounts. There would have been money there, but where and how to spend the money, it would be decided by the man of the house.

Even in the 21st century, the situation has not changed much. A recent survey by Tata AIA Life Insurance shows that even 59% of working women do not keep track of their own money, nor do they have the right to decide how to manage money.

All the metros of the country were included in the survey named Financial Awareness among Women. It showed how to spend money – in this case 39% of women only budget for the household month after month. In this too, she was seen limited to ration-medicines. She waits for the ‘final voice’ to make big decisions like buying a TV, fridge or car, or buying a house. That is, the decision of men.

More than 60% of working women admit that their husbands manage the money, as they often ‘forget’. This mistake did not happen suddenly. His rawness in terms of money was confirmed by speaking again and again. It starts from childhood, when instead of teaching maths, they are stressed on becoming a doctor, teacher or whatever, something that doesn’t require accounting.

When girls reach the office with this habit inculcated in school-college, they find that their tongue falters while talking about money. They assume that good women do not ‘demand’ money. This is the reason that most of the women do not debate on salary, but start work considering what they get.

According to Randstad, a multinational human resources company based in the Netherlands, more than 60% of women in a country like the US do not negotiate a salary before joining a job. At the same time, more than 90% of men talk long about salary before taking an offer.

They express how beneficial their presence can be to the company, while women with exactly the same or more experience remain silent.

Even if a woman asks for equal salary, she is rejected as crooked and finicky. In the year 2018, a study was done, which was named- Do Women Ask? In conversation with 4 thousand 6 hundred women of developed countries, it was found that they were not hired after negotiating the salary.

That is, even when they talk about money, they are considered to be bad-tempered and mis-fit for work, whereas the same attitude shows men to be serious about work and responsible for family.

There is no country or profession in the world where women earn as much as men. No matter how much he does more work than men, he will get less salary from him. And this trend is going to continue for at least the next 150 years.

It is not us, says the World Economic Forum. If we want to see men and women getting equal pay for equal work, then we have to wait till the year 2154.

It was in the year 1956, when Princess Grace Kelly of Monaco grabbed the world’s first handbag. Not to handle money, but to hide my pregnancy. She didn’t want the photographers to see her with an enlarged belly. Soon this bag came to be called the Cali bag and in a few decades women all over the world started carrying handbags. It is a different matter that less money in it, and more stuff for the needs of the family going together.

Now is the time when every woman in the world has a handbag. That bag, in which one food is also of money, and also of self-confidence. Otherwise, the next 150 years are there to wait.

1. No matter how much a woman proves herself, but a man does not stop doubting

The Islamic Republic of Iran Broadcasting (IRIB) also does not like women eating sandwiches. They are modern, eat half-cooked things and spew half-baked thoughts. Therefore, girls who eat sandwiches will no longer be a part of Persian films. In Iran, an outcry started on social media about this matter, but the mood of a suspicious man has become like a government decree. No matter what the wife may say, there is no doubt. (read full news)

2. If the wife is better than the husband in education or money; So even if she is praised outside, she will have to face the violence of her husband in a closed room.

Let my mistakes sleep with me! My head burning in the memory of you must have cooled down very soon after drowning in the water. May God be with you always..! Mine survived. Tried again, but she survived again. During this time her husband, who had lived with many women, described the former wife as eccentric and man-eating and said that she had nothing to do other than arguments. (read full news)

3. No matter how fair and beautiful the wife or girlfriend may be, but her height should be nineteen than the man

Once a picture of Prince Harry and Meghan Markle appeared on the cover of Time magazine. Against a light background, the Prince and his wife dressed in black and white looked like a museum art form. A young couple full of love and courage. Eyes stared straight at the camera. Everything is beautiful, but the picture is like a hammer turning down the blunt-mindedness of people. They started calling Harry a nerdy and Megan a dominating woman. (read full news)