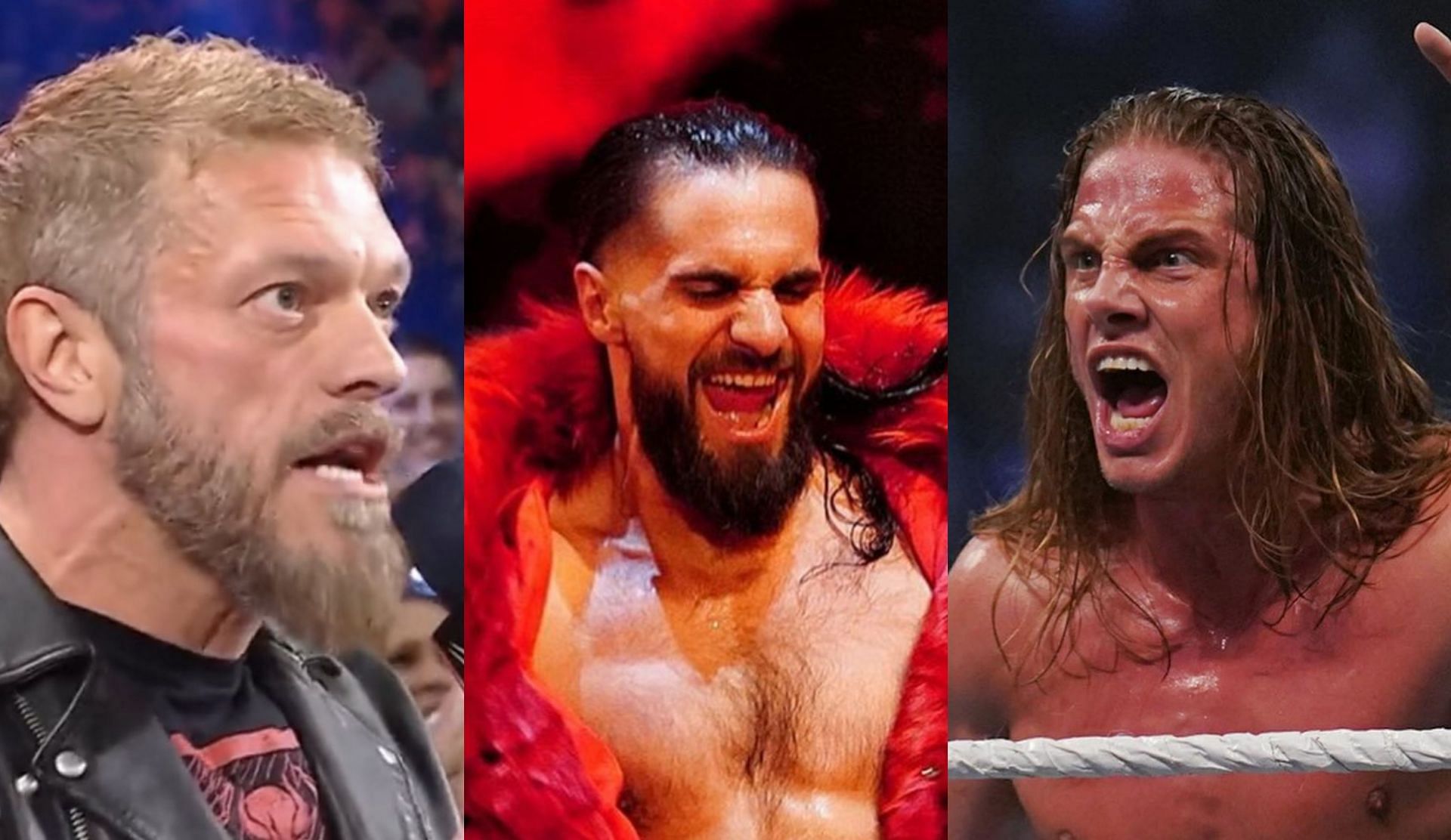 From the beginning of the match, both of them started getting angry at each other and both brought ladders in the ring. They put up their respective ladders and tried to climb. Bayley prevented Blair from climbing the ladder, and then Blair carried Bayley out of the ring by the ladder. Bianca then started climbing the ladder but the heel star stopped her. Bayley hurls the champion at ringside. Bayley continued her dominance in the ring. Bianca, on the other hand, focused on taking the championship from the top by climbing the ladder. Bayley stopped him but Blair attacked him. Blair slams Bayley onto the ladder and then hits a splash. Bayley attacked Blair using a ladder. The damage control leader gave Blair a sunset flip on the ladder placed at the corner of the ring. Bayley climbed the ladder to claim the title but was stopped by the champion. Heel Star then attacked Blair with a ladder and kicked him out of the ring. Bayley sets the ladder at ringside and makes Blair lie on it. Along with this, elbow drop was put on him. Bailey herself appeared to be in a lot of pain with Blair. Blair bounces back but the damage control leader is hard to stop. He placed Bianca in the middle of the ladder and tried to suppress it. However, Champion left and then attacked Bayley with a ladder. Bayley then stopped Blair from taking out the championship. Later he also applied a spine buster on the heel star and then dropped the ladder. Due to this, Bianca was out of the ring and Bailey took out the knee strap. Meanwhile, Bianca Blair put her finisher KOD and she came close to becoming the champion. Damage control came down the ladder and then attacked Bianca. The defending champions defended themselves and simultaneously put a double KOD on the Women’s Tag Team Champions. Bayley enters the ring and attacks Blair with a ladder. Heel Starr put the ladder on the turnbuckle and pushed Blair into it. Bailey planted his finisher Rose Plant on the opponent and then tried to take the championship himself by placing Blair in the middle of the ladder. Bianca used her strength to drop the ladder and Bailey also fell. Together the two stars climbed the ladder and Bayley pulled Blair’s peak. That’s why she fell but he attacked Bailey and knocked her down. Bianca gave Bayley a KOD on the ladder and won the championship by taking the championship from the top.

Backstage, Miz was talking to his wife, Maryse, and the former WWE Champion revealed that he hadn’t met Triple H yet. Well, the comic character came there again to annoy Miz.

Carrion Cross refused to wear the strap and the referee once again asked him to wear the strap. Cross made it outside the ring and Scarlett pulled the strap. This distracted Drew and Cross attacked him. He spoils Drew’s condition at ringside and between the fans. The former WWE Champion later returned and slammed Cross onto the apron. McIntyre strapped Cross on and the match officially began. McIntyre badly attacked Cross in the back with a strap. Cross strikes Drew’s shoulder and that is why the referee tells the match to stop. McIntyre refused and the fight continued. During the match, Carrion constantly targeted Drew’s shoulder. The Scottish star attempted to make a comeback with a chop but the former NXT Champion continued to dominate. At ringside, Cross tied McIntyre to the ringpost and then repeatedly hit him with a strap. Cross applied a side suplex to the opponent in the ring but he failed to pin successfully. The heel star once again attacked with the strap, and the Scottish star returned in a fit of rage. He applied belly to belly on the opponent and gave him a kneebreaker. Later countering Carrion’s move, he also applied a spinebuster. Both punched each other and then attacked with the strap as well. Drew applies Future Shock DDT to his enemy and prepares to apply Claymore. Scarlett stopped them and then sprayed paper spray in their eyes. Cross then hit McIntyre with a cross hammer and pinned the win.

As the match began, Ronda attacked Liv and trapped her in the submission. Liv bounces back and then tries to attack Rousey with the bat. The UFC veteran defends himself and takes the bat outside the ring. Ronda traps Liv in an ankle lock and Liv counters it and puts the veteran outside the ring. Rousey punches and kicks Liv and then decides to attack her with the bat. Liv spoils Ronda’s condition by using a fire extinguisher. However, Rousey made a comeback and then took the champ to bad luck with the bat. Liv returned with a kick to the former UFC star and then attacked the opponent with the bat himself. Rousey attacked Morgan with both a black belt and a bat. Liv came back and brought the table to the ring. Morgan set the table at the corner of the ring and didn’t notice Ronda. Rousey took advantage of this by trapping Morgan in the ropes and making submissions. Both were out of the ring and Morgan attacked Rousey with a steel chair. He stuck this chair on the ringpost. Later the chair fell. Well, Liv targeted his back twice. He attacked the WrestleMania main eventer with a steel chair before hitting him with a strong move. However, she failed to pin down. Liv smashes Ronda on the table with a leg drop and it looks like Liv will win. However, Ronda made a submission on Liv in the meantime, and the champion held herself up for a long time. However, Morgan eventually passed out and Ronda won.

Backstage, The Miz was questioned about appearing in Extreme Rules. The Miz reveals that he has come over to Triple H to talk to Dexter Loomis. Meanwhile, a comic character gave him a T-shirt. However, Miz throws it and kicks it.

The match started with a brawl between all the superstars and one by one the superstars were outside the ring. Ridge Holland and Butch hit Ludwig with a dropkick. The IC Champion came and attacked both of them. Vinci hits Sheamus outside the ring. The Imperium had the upper hand and the trio put Sheamus in bad shape at ringside. He pushed the veteran into the steel steps. Meanwhile, Butch unsuccessfully tried to save his companion. The IC Champion kept chops on Sheamus and slammed him to the desk. In the ring, the Heel Stars target Butch and Ridge and spoil their condition. Meanwhile Holland picked up Kaiser and Vinci and slammed them together. Gunther attacked them. Vinci and Kaizer smash Ridge at ringside with a powerbomb and uppercut. Imperium aimed Butch and gave his pose. Gunther also chops on Butch. Sheamus made a comeback and took on the former NXT Tag Team Champions at ringside. He came into the ring and attacked Gunther and the champion put a German suplex here. However, the Irish star bounced back and picked up Gunther and slammed him. Sheamus broke his opponent’s 10 beats from the battle and was joined by other members of the Brawling Brutes. During this, Sheamus applied and pinned a brogkick. Vinci stopped them by making a move from the top rope. Vinci and Kaizer together try to fight the Brutes. Gunther took him out of the ring, and in the meantime, Sheamus returned to hit the Irish Curs Backbreaker. Simultaneously traps them in submission and Kaizer attacks Sheamus with shillag. Gunther tries to pin but is stopped by Butch and Holland. A brawl was seen. Gunther and Sheamus hit each other with tremendous chops. All the stars took their time and one by one they spoiled each other’s condition. Sheamus smashed Gunther to the pin but Vinci and Kaiser pulled him out of the ring. Ridge took over the former NXT Tag Team Champions, and then Butch made a high-flying move on him. In the ring, Gunther attacked Sheamus with a shillag but the veteran kicked out. Butch and Ridge Holland put Gunther in bad shape and Sheamus then attacked him with shillag. Sheamus picks up Gunther and puts a Celtic cross on the table. All the members of the Brawling Brutes were in the ring. Meanwhile, Ridge and Butch catch Giovanni. Sheamus made a brogkick and pinned the win.

Superstars from both the Raw and SmackDown brands are going to participate in Extreme Rules. WWE has fixed 6 matches for the show. The good thing is that all matches have stipulations attached. WWE booked only one match last year, in which there was a condition. However, every match of this year’s show involves stimulation.

Your official #ExtremeRules match card for today. We’re gonna be witnessing one hell of a show! ,

Philly, get ready. You’re in for a treat!

WWE Extreme Rules will have many exciting matches

Roman Reigns will no longer be available in Extreme Rules 2022. That’s why WWE was under pressure to book good matches on the show and they haven’t disappointed with the match card yet. The event will see an Extreme Rules match between Ronda Rousey and Liv Morgan for the SmackDown Women’s Championship. Along with this, Drew McIntyre and Carrion Cross have been witnessing animosity for a long time and now they will come face to face in a strap match.

Bayley and Bianca Blair will have a ladder match for the Raw Women’s Title. For the first time in WWE history, there will be a singles ladder match between the Women’s Superstars. With this match both the women superstars will create history. WWE has booked an Irish Donniebrook match between Brawling Brutes and Imperium.

The Fight Pit match between Matt Riddle and Seth Rollins has been fixed. This match between both the superstars can be dangerous and Daniel Cormier is going to be the special guest referee in this. Many people are hoping that Brock Lesnar may enter here. If that happens, it will be a big deal as there were indications of a match between Lesnar and Daniels in the UFC.

At that time this dream match could not happen but now it is possible in WWE. Edge and Finn Balor will see an “I Quit” match. This match can be very explosive. There are also signs of the return of Bray Wyatt in this event. This show can definitely prove to be memorable.

Previous Pankaj Advani became world champion for the 25th time, defeated compatriots in the final
Next david miller daughter death before ind vs sa 2nd odi shares heartfelt message | IND vs SA: The death of this player’s little ‘Rockstar’ between India-Africa series, was created in the first ODI match itself